The Nerf Modulus Tri-Strike is an exciting blaster that was released in the second half of 2016 as part of the N-Strike Modulus series.

Packaged with a set of different attachments, including a missile launcher and a mega dart barrel barrel extension, the Tri-Strike looks like a winner.

This is our review of the Nerf Modulus Tri-Strike and its main features.

The Modulus series was released towards the end of 2015, with a focus on customization of blasters with multiple accessories that can be interchanged. So if you buy multiple blasters in the Modulus range, you can use the attachments that come with them on all of the other blasters.

At the time of writing, there’s around 10 different Modulus Series blasters available, plus a few upgrade kits with extra components that you can attach to the blasters. Three blasters have been released in 2017 so far.

According to this video, you can create more than 1,000 different system combinations with all the blasters and accessories that exist in the Modulus series. Pretty cool!

Check out our list of best Nerf guns ever made.

With a seemingly great set of features, the Tri-Strike is an exciting blaster in the Modulus range. The Tri-Strike Elite blaster is essentially the base to which you can attach all the different components to create different types of blasters. 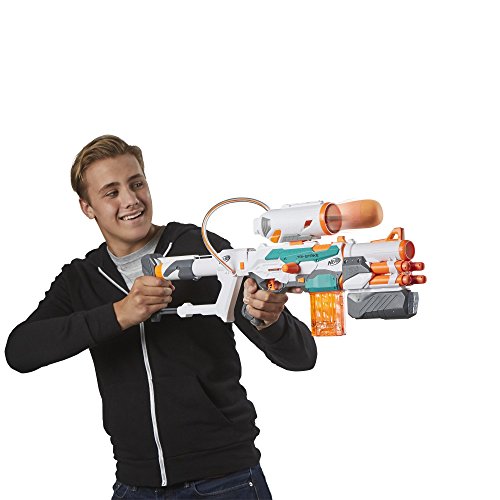 The Tri-Strike is a bolt-action blaster with very decent looks, ergonomics and performance. The bare-naked Tri-Strike base gun (without the shoulder stock, missile launcher and barrel extension) actually looks very similar to the N-Strike Longstrike from 2010 (discontinued), without the barrel and stock attachments.

The 10-dart clip holds 10 Elite Darts and can be firmly attached to the front of the blaster.

The location of the mag release button is a bit awkward in the sense that you can't actually reach it with your index finger when holding the blaster in firing position. It's not a big deal but we're just not sure why it was designed that way.

There's a tactical rail on top of the blaster to attach accessories, such as the missile launcher that comes with the Tri-Strike. The jam door sits in front of the tactical rail but rest assured that you won't have to deal with many jams with this blaster.

The Tri-Strike by itself is actually quite a basic blaster, but the attachments make this a really cool Nerf gun to have. 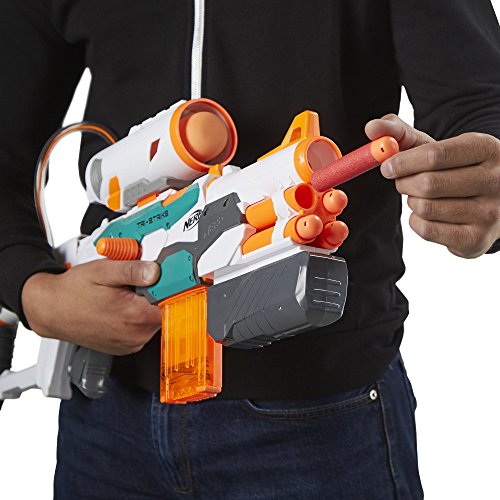 Right at the front of the Tri-Strike sits the mega dart barrel extension that holds the 4 mega darts. It's an attachment that you can use for any other N-Strike blasters you have in your collection.

Firing the mega darts is done manually one-by-one with a simple plunger, so it's really dependent on your skills how far you can fire the darts. We were quite impressed though with the firing range and accuracy of the mega darts. But it must be said that with the Mega Darts, while the firing range may be decent, the accuracy is only good up until 20 feet. After that, the darts start to swing.

What's awesome though is that the launcher can also be directly attached to the shoulder stock creating a whole new blaster by itself. So you don't necessarily need the Tri-Strike to use the missile launcher.

Firing a missile is easy: extend the shoulder stock and slam it forward. The air is pushed through the pump and launches the missile. The only drawback of this mechanism is that slamming the stock affects accuracy of firing. 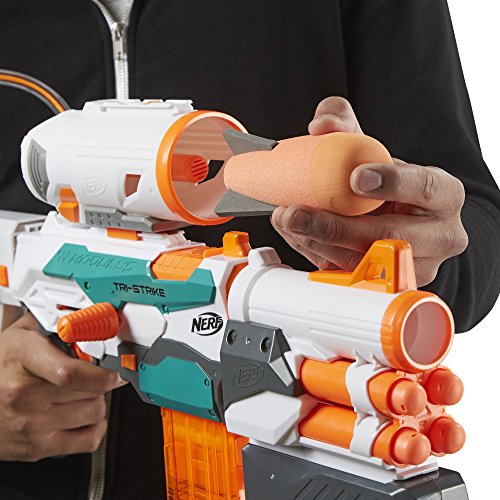 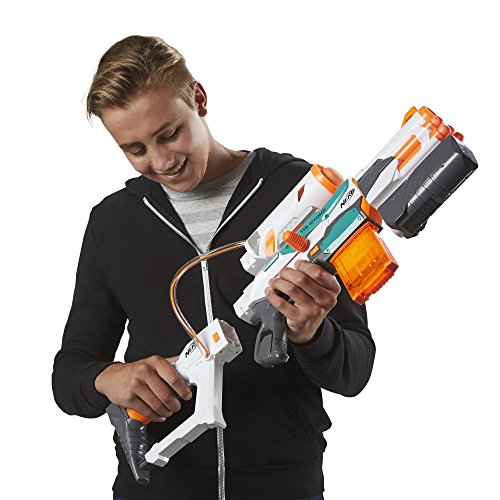 The detachable shoulder stock on the Tri-Strike - or any Nerf blaster - is meant to help stabilize the blaster when firing. This is most useful when using slam fire, but apart from that it doesn't really serve much purpose because there is never any serious recoil with Nerf guns. But hey, Nerf battles are about having fun, not about having the most sophisticated guns to destroy each other.

Having said all that, the shoulder stock does help to reduce arm strain when playing for a long time. But more importantly, it makes the blaster look much cooler. And in the case of the Tri-Strike, the missile launcher is attached to the shoulder stock with a little air pump.

The Tri-Strike comes standard with 10 Elite Darts that you can put in the 10-dart clip, 4 Mega Darts for the mega dart barrel extension (our personal favorite) and 1 missile for the launcher on top of the blaster. To be able to fire with the Tri-Strike in multiple ways is what it makes this blaster really cool.

Watch this video to see the Nerf Modulus Tri-Strike in action:

What we like about the Modulus Tri-Strike - and other blasters in the Modulus range - is its versatility. The different types of darts and firing mechanisms, and to be able to create different gun styles with the different attachments is what makes this blaster really exciting.

It's definitely worth looking into some of the upgrade kits as well, as there are some really cool attachments available. Things are looking good for the Modulus series with hopefully more blasters to come.